There have been a couple of products that have grabbed our attention recently with the clever use of web technology. 'Crystal Knows' and 'How Old', both of which are in their infancy but will no doubt develop into mighty augmented web tools.

I was initially skeptical of 'Crystal Knows' which claims you can type in a name and it will tell you that person’s communication preferences when; speaking to them, emailing them, working with them and selling to them. It also tells you personality traits of the person with what comes naturally to them or not but all with an "Accuracy confidence" percentage.

Take my work colleague Elliott for example. His two liner statement is:

“Elliott is very diligent, steady, calm, and works hard to accomplish one goal at a time, but might seem overly risk-averse at times.” (Accuracy confidence: 70%) 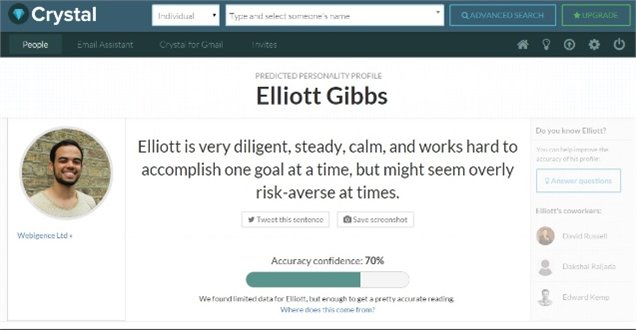 I’d say this is pretty much spot on (and he has agreed). The data comes from a variety of public sources such as Facebook, LinkedIn, Twitter etc and any answers people have entered into 'Crystal Knows' about Elliott. 'Crystal Knows' then runs a personality detection analysis on the text to match with one of 64 different personality types that they use (based on several personality assessments, like the Five-Factor Inventory, DiSC, and True Colors). 'Crystal Knows' does state that it is “not intended to provide a 100% perfect personality reading, but can provide useful insights to improve communication with anyone that has an online presence.”

We all know that different people have different communication styles but working it out for each individual can be time consuming and tricky within the limits of email and phone conversations before you even get to arrange an initial face-to-face meeting. So this is an interesting tool to use for communications for new business leads or new clients in order to communicate in the right way for them to be as receptive as possible to you and your organisation. 'Crystal Knows' also tells you how to re-write your email using the best words, phrases and tone for the recipient.

The other site that we had a bit of fun with in the office was 'How Old'. This site guesses your age based on a photo you upload.

Initially photos of some of the team were relatively accurate for them but then I tried and got a wildly incorrect variations of age suggestions (of which I will not specify). Regardless of the accuracy, the technology is actually very clever.

Image: How Old's prediction on the 2015 UK Political Candidates 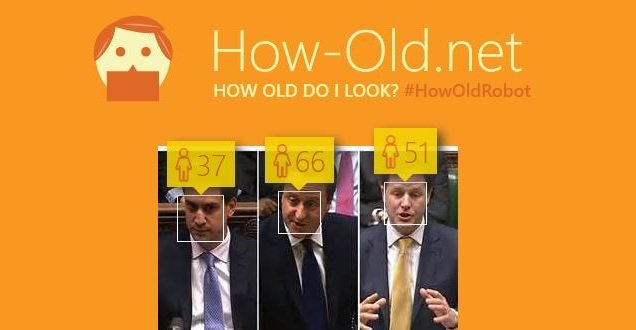 The site was created initially because Corom Thompson and Santosh Balasubramanian, Engineers in Information Management and Machine Learning at Microsoft wanted to showcase how developers can easily and quickly build intelligent applications using Azure services (you can read more about it from the 'How Old' website).

Eason Wang is a Senior Program Manager on Bing and worked directly on this project. On his blog it explains that 'How Old' works using an API (Face) which relies on the technology of face detection, gender classification and age detection.

Basically they pin-point on your face details such as hairline, eyebrow height, eye depth and variation of colour and smoothness of skin and because Microsoft has a “huge dataset of pictures with known ages from which they can compare all the coordinates that they plot on your photo with their known age photos, the result returned to you is the closest match to the same coordinates in their database of photos.” Then the machine learning kicks in to make it more accurate each time.

Image: How Old's prediction on our Creative Director Rob 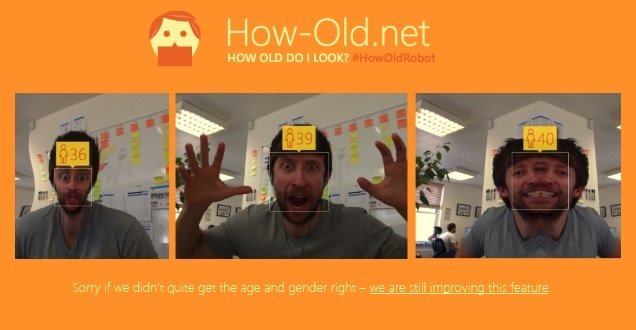 Eason Wang states that Face API is just one of the many features that they have made open in Project Oxford and that there are many other core capabilities in the API to empower innovative scenarios, so look out for this technology to be used in a multitude of ways from banking security identification to dating websites.

Tweet us @Webigence your thoughts on these and any other interesting web technologies you've found.